The people of Ansalon have rebuilt their lives, their houses, their families. The Companions of the Lance, too, have returned to their homes, raising children and putting the days of their heroic deeds behind them. But peace on Krynn comes at a price.

The forces of darkness are ever vigilant, searching for ways to erode the balance of power and take control. When subtle changes begin to permeate the fragile peace, new lives are drawn into the web of fate woven around all the races. When Flint Fireforge, dwarf and metalsmith, receives a wondrous summons from the Speaker of the Sun, he journeys to the fabled elven city of Qualinost. There he meets Tanis, a thoughtful youth born of a tragic union between elf and man.

Tanis and Flint, each a misfit in his own way, find themselves unlikely friends. But a pompous elf lord is mysteriously slain, and another elf soon meets the same fate. Tanis stands accused, and if his innocence cannot be proven, the half-elf will be banished forever. The people of Krynn have known war in past ages. Some are still alive who remember the triumph of good at the conclusion of the War of the Lance.

Still more remember the devastation of the Chaos War, which ended the Fourth Age of the world. But now a new war is about to begin, more terrible than any have known. This war is one for the very heart and soul of the world itself. Lifelong friends, they went their separate ways. Now they are together again, though each holds secrets from the others in his heart.

They do not speak of their secrets. Not then. Not until a chance encounter with a beautiful, sorrowful woman, who bears a magical crystal staff, draws the companions deeper into the shadows, forever changing their lives and shaping the fate of the world. Only fragments of the account of Huma survived the Cataclysm that broke the world of Krynn. The fullness of his tale has never been told — until now. One man took up the call to defend the world against the Queen of Darkness.

He was the first Hero of the Lance, driven by his devotion to the Oath and the Measure and his love for a silver dragon. His life made him a hero. Here is the tale that made him a legend…. Kitiara discovers that a former lover, Tanis Half-elven, and his friends were responsible for the death of Highlord Verminaard. This revelation puts Kit in danger, for Emperor Ariakas hears of the connection and suspects Kit of having arranged the assassination.

When the leader of the Silvanesti elves dies, conflict threatens to drive his sons apart. While Sithas wishes the elves to withdraw more and more from any contact with other races, Kith-Kanan and his Wildrunners forge connections and trade goods with the humans of Ergoth.

As the world of Krynn watches, a new elven nation rises from the strife. The companions believe they have slain the evil Dragon Highlord Verminaard. They have rescued the refugees from Pax Tharkas and taken them to a valley in the Kharolis mountains. Raistlin Majere has become a Black Robe wizard and travels to Neraka, the lord city of the Dark Queen, ostensibly to work for her, though in reality he means to further his own quest for power.

But Takhisis finds out that the dragon orb has entered her city and sends her draconians to find and destroy the wizard who has it in his possession. Before her agents can strike, though, Raistlin finds out that Takhisis means to take control of all wizardly magic. Vinas Solamnus: soldier, nobleman, priest.

Vinas Solamnus: rebel, commander, conqueror. No knight was ever nobler, more spiritual, more idealistic than Vinas Solamnus The story of his early years, his education, and his crucible is truly one of the most famous War can get a fellow killed. The fearless draconians of the War of the Lance have retired from the field of battle to a pleasant valley in the Kharolis Mountains. Well, it would be pleasant, if it weren't for some dwarves, whose irritating feuding prevents the draconians from realizing their greatest hope - the ability to continue their doomed race.

When the dwarves discover a map leading to a fortune buried in the dwarven kingdom of Thorbardin, the draconians are swept up in a feverish race for treasure. The audio edition of the opening title in a new trilogy from Dragonlance setting co-creator Margaret Weis takes up where the War of Souls series left off with the central character, Mina. While following her story, this new trilogy also explores the chaos that is post-war Krynn.

Dragsons, the true children of Krynn, are power incarnate, and they know it. They come in all guises and forms. Their personalities are as varied as thier colors. Their magical abilities are virtually unlimited. And nothing is so terrifying as dragons on the wing. In this collection, a follow-up to the popular The Dragonss of Krynn anthology, Dragonlance creators, Margaret Weis and Tracy Hickman serve up a fantastical array of dragon tales featuring the motley races of Krynn and the deadliest creatres of the Dragonlance saga.

The sixth and final title in a series of recovers of the classic Preludes series. First launched over a decade ago, the Preludes series has continued to prove popular with Dragonlance fans. 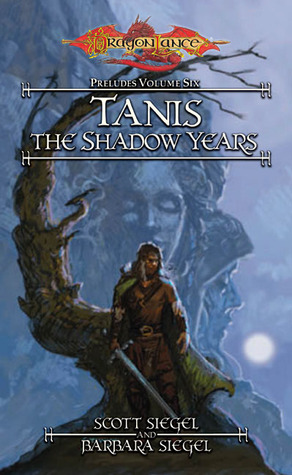 This rerelease of Tanis: The Shadow Years showcases a new look that is also reflected in the other recovers of this series. The title features cover art from lead Dragonlance saga artist Matt Stawicki.

What disappointed you about Tanis: The Shadow Years? The story seems like it was written for a completely different series and shoe-horned into Dragonlance. It makes absolutely no sense for Tanis, fills in no background about him, doesn't fit with the Chronicles, and only explains a few days out of the 5 year period it is supposed to explain. What could Barbara Siegel and Scott Siegel have done to make this a more enjoyable book for you?

The authors apparently never read any of the material surrounding Dragonlance before launching into this book. Tanis's father is never explain in any detail, the whole premise of the book. Tanis was in love with Kit, and suddenly starts falling in love with the total stranger he just met, out of the clear blue sky. Good reading. Since Tanis is my favorite character from the Dragonlance story line, I was eager to read this book. I am happy I did. Format: Kindle Edition. One of the worst books of the Preludes series, IMO.

I just did NOT care about these characters. Warrning, Slight Spoilers ahead!

Tanis is one of my favorite characters and I like his careful and introspective manner. The good news is that those characteristics of Tanis are mostly present in this book but as for all the other characters that were created for this story I just don't like any of them. The Mage Keshpa is a jerk, his friend the Dwarf is a lying theif, and Kespa's one True Love Brandella is just an idiot who doesn't contribute much to the story except to be an object of lust for Tanis and Keshpa.

To make Matters worse this book seems to go on way to long. Just when you think it should end Tanis and Brandella get pulled away to another side adventure. Then once that is resolved Tanis goes in search of a letter and has another small battle. I do like the basic idea of the story. Tanis being sent into Keshpa's Memories but at the end of the book they kinda break the proving that Tanis Traveled back in time not into a dying Mage's Memory. I know there is Magic involved but it seems like they are playing fast and loose with physics here. A single person's Memory is not the same as actually traveling back in time like Caramon and Tasslehoff did in the Legends series.

I just feel like it would have made more sense to have Keshpa send Tanis back in time rather then confusing readers with the idea that he is only in the Mage's memory and then suddenly mentioning that what he did back in the Memory actually effected the past. Maybe if it was presented as a strange un anticipated side effect that would be one thing but the author presents it here like it was just assumed that everyone, the readers and the characters would know that traveling in someones memory of the past actually can effect that real world past. It's just silly. This book needed a better editor, one that would have asked the author hard questions about the logic of the story, the necessity of certain parts of the story and would have prompted more likable character development.

More like Dreadful-lance. Format: Mass Market Paperback. It is hard to pin down the character of Tanis Half-Elven from Dragonlance. The Siegels simply do not have a good grasp on the character and, even worse, they show a stunning lack of familiarity with the basics of the Dragonlance universe. Granted the "Preludes" series were written before a lot of the material but the Siegels do not even seem familiar with the Chronicles and Legends. That would be fine if there was a good plot. There simply is not. The Siegels' supporting characters are either annoying or forgettable. The writing is inconsistent as the Siegels seem to vacillate on what type of book they are writing.

A writer can combine mystery, romance, action and psychological thriller in one plot. The Siegels seem to think these elements need to be separated. Here is an action chapter. Here is a romance chapter. In this chapter we learn more about Tanis' motivations. The ending pages contain some one of the most maudlin writing I have ever come across in any book. There is little to commend in this book. See all 27 reviews. There's a problem loading this menu right now. Learn more about Amazon Prime.